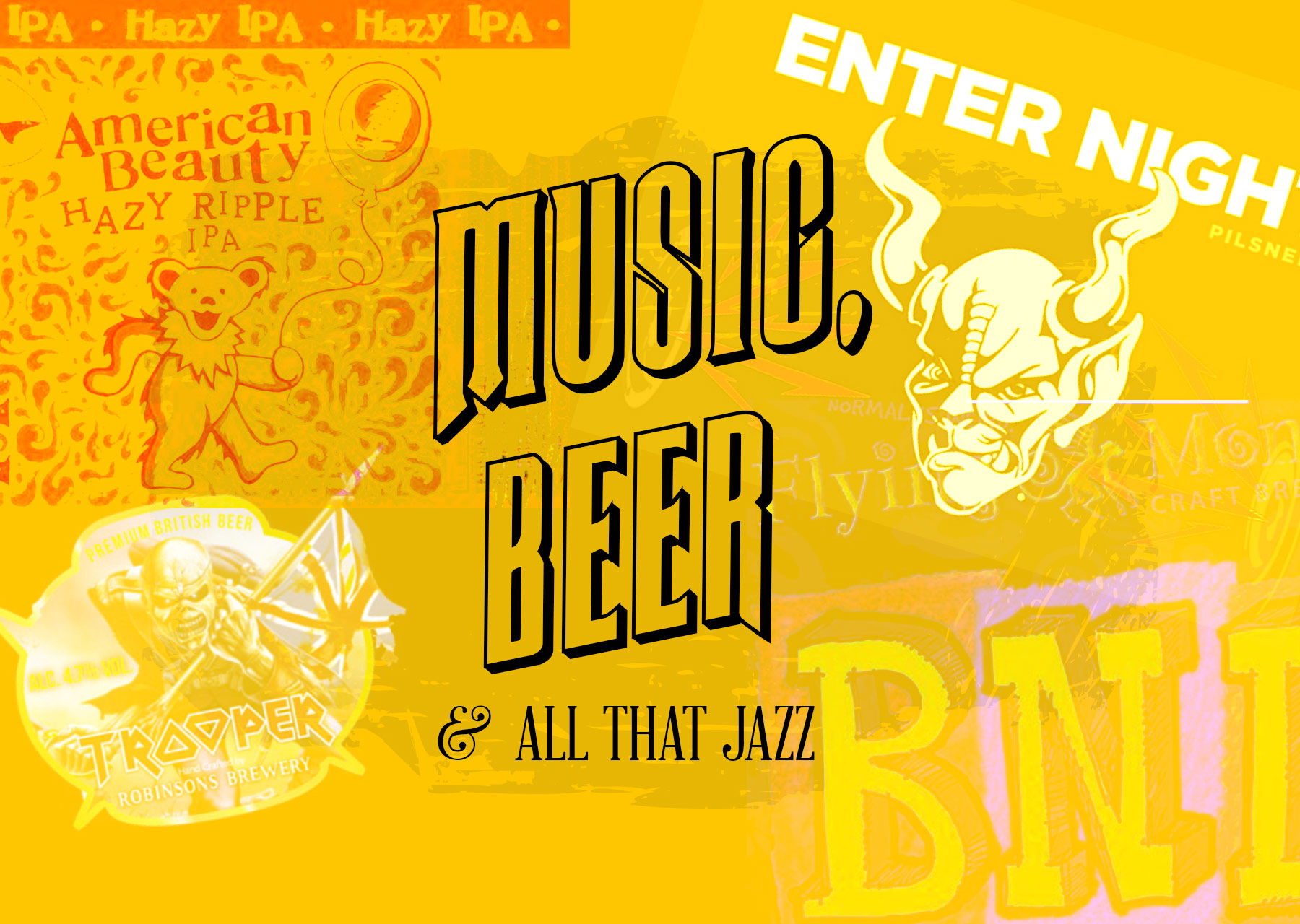 Now here’s a match made in craft beer heaven – music and beer! While it’s easy to just slap on a label with a band’s logo on a beer can, most musician-and-brewer collaborations are a much more complicated affair. Since music and beer are both an art and a technical science, when collaborations occur, it can be explosive. Here are some examples of these collaborations which are literally music to our beers!

When the brewery was looking for a band with an outspoken personality, they hit the goldmine with Rock and Roll Hall of Fame band Metallica. Officially released under the Stone “imprint” Arrogant Consortia, home to some of Stone Brewing’s more far-out brews, this beer is “a unique expression of the shared values that have helped define Metallica and Stone Brewing: fiercely independent, transcending genres, shattering preconceptions and challenging convention.”

Fans assumed that this beer would be similar to the genre – aggressive, intensely hopped and bitter. However, the creators decided to take a different approach. Instead of an IPA, the brewery created an easy-drinking pilsner that would pair perfectly with gigs, concerts, or a casual evening in your backyard with friends.

And here’s the best part – since Metallica has had a devoted fanbase for nearly four decades, this drove positive interest in the beer collaboration, even from people who wouldn’t normally buy craft beer. Now that sounds like a win-win!

Style: Pilsner, ABV: 5.7 % , IBU: 45
Genre: Heavy metal, Thrash metal
About the band: Metallica is an American heavy metal band that was formed in 1981 in Los Angeles.
About the brewery: Founded by Greg Koch and Steve Wagner, Stone Brewing opened in San Diego County in 1996. It is the ninth-largest craft brewer in the U.S.

If you thought selling millions of records would be enough to keep Iron Maiden busy, think again. First launched in 2013, Iron Maiden’s beer range was developed by the band’s frontman and ale enthusiast Bruce Dickinson and Robinsons’ head brewer Martyn Weeks. After bagging a side hustle of the highest order, today, Iron Maiden and Robinsons’ Brewery have sold over 20 million pints.

Not surprisingly, the idea for a Maiden beer didn’t come from the band. Instead they were approached by Robinsons, a U.K. brewery with roughly 200 years of experience. This was Iron Maiden’s first actual audition in 30 years. The venture was first announced in March 2013, with Trooper ale — named after the classic Maiden track and boasting “malt flavors and citric notes from a unique blend of Bobec, Goldings and Cascade hops” with a “subtle hint of lemon.”

When they started with a simple English ale, little did they know that both the band and the brewery would be expanding their repertoire and their empire. Since 2013, every summer, the collaboration has added a bunch of unique additions to its beer portfolio. From the original Trooper beer, Light Brigade session ale, Sun and Steel saké lager, Hallowed Belgian style hybrid ale, Red ‘N’ Black porter, 666 higher gravity brew, The Fear of the Dark stout and the Trooper IPA, this collaboration is going where no one has gone before. And yes, they don’t have any plans of slowing it down.

Style: Extra Special/Strong Bitter, ABV: 4.7%, IBU: 35
Genre: Heavy metal
About the band: Iron Maiden are an English heavy metal band formed in 1975 in East London.
About the brewery: Robinsons Brewery is a family-run, regional brewery, founded in 1849 in Stockport, England. The brewery continues to be run by the fifth and sixth generations of the Robinson family.

Dogfish Head is no stranger to musical collaborations and the kickstarted the “Music Series of Beer” that comprised of releases like Bitches Brew by Miles Davis, Beer Thousand with Guided By Voices, Faithfull Ale by Pearl Jam, Positive Contact by Deltron 3030 and their latest Dragons & YumYums by The Flaming Lips. What’s interesting about Dogfish Head’s music series is that it covers various genres of music from Jazz, Post-Punk Alternative Rock, Progressive metal, Grunge to Hip Hop. However, their loudest musical tribute is undoubtedly, the American Beauty by Grateful Dead.

Dogfish Head’s relationship with the Grateful Dead began in 2013, when the first version of American Beauty was released with much success. And in 2019, they decided to celebrate their ‘long strange trip’ together, with a third iteration called American Beauty Hazy Ripple IPA, a psychedelic, 7.0% ABV ale that is bursting with notes of tropical fruit and juicy citrus. Their journey to develop the perfect recipe for American Beauty Hazy Ripple IPA was a lengthy one, but they ‘put their money where their love is’. A true labor of love, this is proof that everyone’s a winner. Especially the beer drinker!

Style: New England IPA, ABV: 7%, IBU: 35
Genre: Psychedelic Rock
About the band: The Grateful Dead was an American rock band formed in 1965 in California. The band is known for its eclectic style, which fused elements of rock, folk, country, jazz, blues, gospel.
About the brewery: Founded by Sam Calagione, Dogfish Head Brewery is a brewing company, founded in 1995 in Milton, Delaware.

If you thought music in India was restricted to sitars, santoors and harmoniums, you’re mostly right. And beer, you ask? Well, that’s taboo too. However, would you believe that there is a burgeoning underground death metal scene in the banished basements and abandoned factories in India? And it has craft beer too! If you don’t believe what you’re reading, ask Megadeth, an American heavy metal band, who headlined at one of these gigs in 2015.

In an attempt to create a festival for metalheads, an abandoned factory in Mumbai was spruced up and a festival was born. That’s not all, organisers roped in Doolally, a microbrewery in India to brew a “Festival Beer” for the occasion – something dark and personable. The brewmaster channeled his inner metalhead and brewed an iconic Altbier, a copper bronze ale known for its distinctive fruity notes and full malt flavour. Indie (means Independent and Indian) metal band Bhayanak Maut christened this beer – gave it a name and identity and called it XOXOXO, after one of it’s songs.

Both the brewery and bands believed that this, “signature beer is a unique privilege,” and tapped the beer together in an area that subsequently became the altar/moshpit.

Style: Altbier, ABV: 5%, IBU: 25
Genre: Groove metal
About the band: Bhayanak Maut is a metal band from Mumbai, India. The band’s name was inspired by a Hindi language horror movie of the same name, which translates to “Horrific Death”.
About the brewery: Founded by Suketu Talekar and Oliver Schauf in 2009, Doolally is India’s first microbrewery.

If you thought beer only pairs well with rock and death metal, you must try this Canadian collaboration that is sweet, fudgy and chocolatey. Now that’s a Canadian stereotype we can all get behind! When alternative pop-rock band Barenaked Ladies was approached by Flying Monkeys Craft Brewery to create a beer together, they really wanted to get into the nitty gritties.

The band themselves, with help from the brewery, crafted a very sweet imperial stout (11% ABV) brewed with cocoa nibs. Infact, Kevin Hearn, keyboardist for the band, created the artwork for the label on the bottle and the entire group took a trip to the brewery in order to help with the brewing process. With 2,000,000 Ecuadorian Cocoa Nibs and a tagline of “Sweet, BNL, sweet,” the BNL Imperial Chocolate Stout was born. Sounds delicious.

Style: Imperial Stout, ABV: 11%, IBU: Not mentioned
Genre: Pop Rock
About the band: Barenaked Ladies is a Canadian rock band formed in 1988 in Scarborough, Ontario.
About the brewery: Founded by Peter Chiodo, The Flying Monkeys Craft Brewery is an independent, locally-owned, craft brewery in Ontario, Canada.

And that’s a wrap! In this one, you explored not just music and beers but also their creators – breweries and bands. Don’t worry, there will be more. There are a lot of music genres to explore and even more beers to drink. Now don’t you love the sound of that!

Pairings That Go Beyond the Grape: Beer and Cheese Please