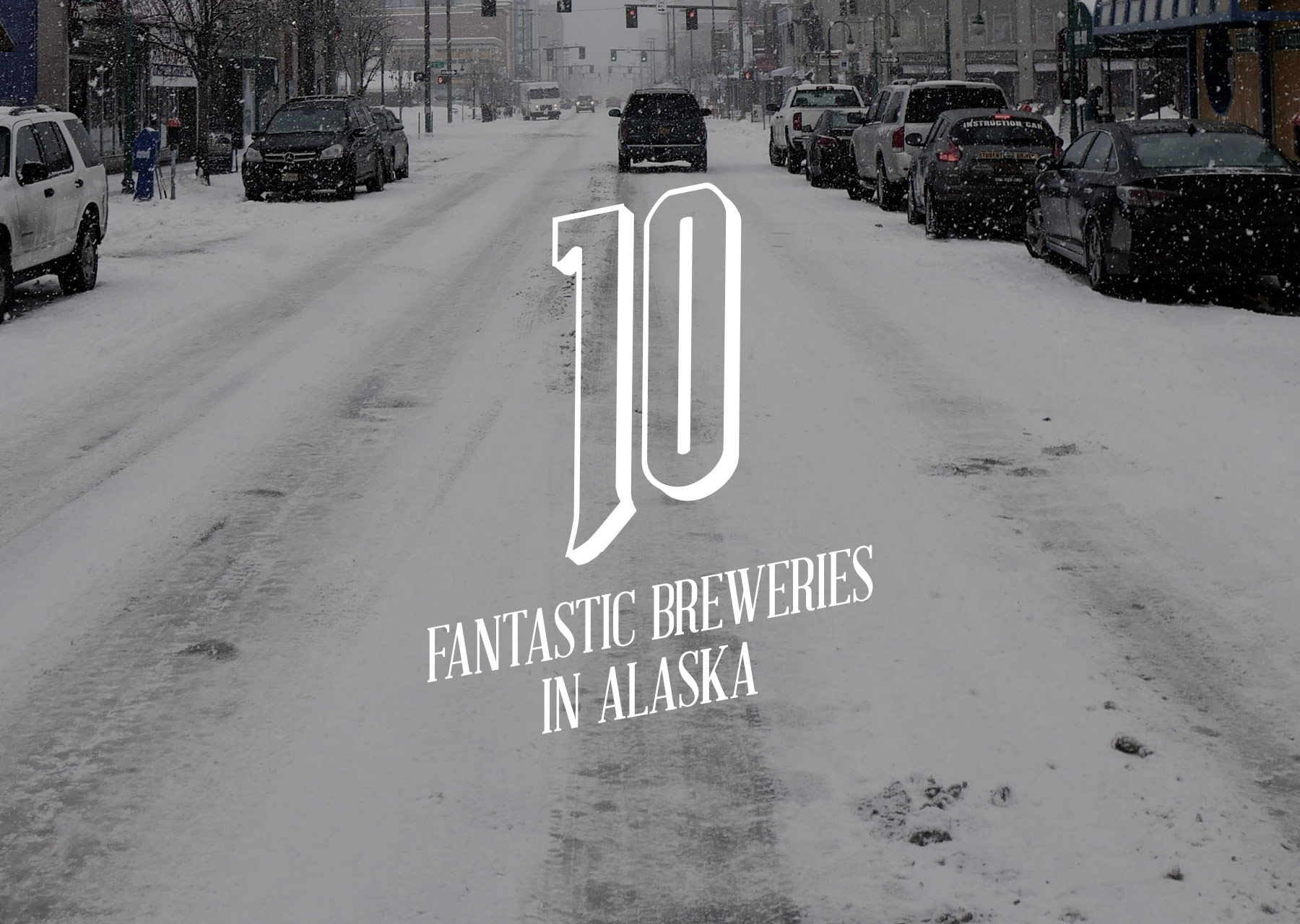 Step off a railroad, cruise or glacier and step into the coolest, uncovered beer scene.

Inspired by the beers brewed here during the Gold Rush Era, Alaskan beers still hold on to a piece of history with beer recipes that include alder-smoked malts and Sitka spruce tips. A handful of breweries are “family businesses”; either run by the formidable husband-wife team or brothers who have come together to make beautiful beer together. If you’re looking for an understated beer scene that’s homegrown, sustainable and refreshing, check out the 10 unique breweries in the land of the Midnight Sun.

Co-founders: Marcy and Geoff Larson
The first brewery in Alaska since Prohibition back in 1986, this is the granddaddy of Alaskan breweries. While their iconic brew, the Alaskan Amber is available in some states in the US, their pilot brews and special batches can only be sampled at their taproom. The recipe for the famous Alaskan Amber was unearthed when Marcy unearthed shipping records from Douglas City Brewing Co. (1899-1907) that listed ingredients for its popular beers and a newspaper article that described the way it was brewed. And when Geoff homebrewed a batch, the Gold Rush Era brew Alaskan Amber was born. Get the proper Alaskan flavors with their brews that have a local flavor since they use pure glacial water, hand harvested spruce tips, and alder smoke. Though they have humble and home grown beginnings, Alaskan Brewing Co. has become one of the most award-winning craft breweries in the history of the Great American Beer Festival, and expanded distribution to 25 states.
Established in: 1986
Must Drink: From their Pilot series, you must try Raspberry Wheat, Pineapple Jalapeño Gose. Their year round hits are SMaSH Galaxy, Husky IPA, Hopothermia, Icy Bay IPA

Founder: Gabe Fletcher
If you fancy beers that should be sipped, not chugged – especially oak-aged beers, sour Belgian-style ales and barrel fermented sours – then anchor yourself at one of Alaska’s most radical breweries. Spread across an 8,000 square foot brewery, and an additional 3,000 square feet walk through and rooftop garden, you still need to wait in line for a tipple. The unique beers that specialize in barrel fermentation with brettanomyces and souring cultures have helped the brewmaster take extreme steps to produce some of the most unique beers. Blurring the lines between new and old styles of beer, this one’s where the serious beer drinkers flock. Much like a Trappist monastery, it even houses a dedicated cool ship for the brewmaster’s open fermentation beers. This one is also recognized (by Ratebeer) as one of the top 100 breweries in the world and the best brewery in Alaska.
Established in: 2010
Events: Concerts, Beer-themed Movie Nights, Wood Fire Oven Pizza Pies
Must Drink: Darkest Hour Imperial Stout, Anadromous Black Sour (ale aged in whiskey and pinot noir barrels), Love Buzz Saison

Founder: Employee-Owned
Home to flightseeing, river and zipline tours, one of the several trails in Denali will take you through the cosy town of Talkeetna through quaint shops and local breweries. Named after the mountain peak Denali (Mt. McKinley), within the Alaskan range, Denali Brewing Co is a locally owned microbrewery on the banks of the confluence of three mighty rivers. Open even through the darkest winters, this is a mecca for those who love exhilarating outdoor adventures, a warm environment and good, honest beer.
Established in: 2011
Must Drink: Dukes of Bavaria (Hefeweizen), Barrel Aged Coconut Chuli Stout (Wood and Barrel Aged), Tinderfoot Von Scotch (Scotch Ale)
Don’t miss: Food with local ingredients and a kid’s menu

Founder: Mike Healy
If you’re on a cruise that’s making its way to Skagway, you must hop off at the town’s namesake brewpub. Especially if you’re hungry. The local’s favorite restaurant, Skagway Brewing Co’s food and beer will make you drool. From Alaskan King Crab to Beer-braised Pulled Pork Burger, and Beer Cheese Soup to Beer Chili, this restaurant is food heaven for locals and tourists alike. In addition to brewing fresh beer, they also dabble in house-infused liquors and simple syrups like French lemonade and Margarita, and Cuke Fizzle with homemade ginger syrup. Highlighted in Ben McFarland’s World’s Best Beers: 1000 Unmissable Brews from Portland to Prague – they have made drinking beer a proud Alaskan tradition.
Established in: 2007
Must drink: Spruce Tip Blonde Ale, Boom Town Brown (American Brown Ale), Blue Top Porter

Co-founders: Stephen Gerteisen & June Gerteisen
With mesmerizing views of the snow-capped mountains Chugach and Talkeetna, and beer created with water from glacier fed rivers, this is Palmer’s first craft brewery. Along with 15 years of brewing experience, the brewmaster also served in the United States Air Force, making this an independent and veteran owned brewery with views to match. And with a co-founder who is not just an artist but a certified cicerone and apprentice BJCP judge (Beer Judge Certification Program), there is art and heart in every glass.
Must drink: No. 5 Boxcar Porter, Palmer Extra Pale Ale, Bitter Earth ESB
Established in: 2011
Events: Take a brewery tour (every Tuesday at 6 p.m.) or attend one of our fun events such as Beer Meets Canvas

Founded by: Paul Wheeler & Jeanne Kitayama
Believe it or not, Haines Brewing Co started as a small home brewing business with a location that had dairy tanks for butter (butterbeer, anyone?). Soon, they grew quickly and exchanged the dairy tanks for closed fermenters, producing one of Alaska’s finest hand-crafted beer brands. Surrounded by mountain views in an expansive patio and beer garden, its unfiltered and seasonal flagship brews are always in high demand. More than they can supply! The best time to visit is during the warm months, when you can savor the beers surrounded by mountain views.
Established in: 1999
Must drink: Devil Made Me Do It (Indian Pale Ale), Dalton Trail Ale (Flagship Pale Ale), Black Fang (Imperial Stout), Captain Cook’s Spruce Tip Ale (Seasonal Ale with Raspberry finish)

Founders: Three Hockey-loving homebrewers
One of the newer kids on the block, Odd Man Rush was founded by three local homebrewers who share a passion for brewing (and hockey). What started as a hobby has grown to a full-blooded brewery and a steady community of followers and supporters. The trio are experimental and are not afraid to use unusual ingredients like raspberry, jalapeño, and habanero chili peppers! You’ll see and feel tinges of the founders’ passion towards hockey across the brewery and taproom. A recent brew called Pammy’s Ale, is inspired by Eagle River’s own Pamela Dreyer, the first female hockey player from Alaska to play for Team USA.
Established in: 2015
Must drink: Blades of Glory (Saison), Black Tail (Black IPA), Fade to Black (Schwartz Bier)

Founder: Mark Staples
Home of Anchorage’s oldest and boldest brewery, their first brew was inspired by an Australian holiday. Today, they brew over 40 different ales and lagers each year in all shapes and sizes (growlers, bottles, cans and kegs). Open daily from 11 am to 8 pm, this is easily one of the state’s top beer destinations, with staff that are friendly and amiable (they were even mentioned in the 2017 edition of Lonely Planet!). Their barrel-aged stouts and barley wines, pair best with the frosty temperature and nippy winter nights. Some are available year-round, some seasonally, and others just once. Their flagship brew Sockeye Red, is an IPA named for the Sockeye salmon that fill their nets in the summer.
Established in: 1995
Must drink: Wolf Pack (Pilsner), Arctic Devil (Barley Wine Ale), Fallen Angel (Belgian-Style Golden Strong Ale)
Events: Brewery tour every Thursday at 6 pm

Founder: Bobby Wilken
Designed and built to brew classic English, German, Belgian and American beer styles, things are simple and non-fussy here. Armed with a traditional brewing education, you’ll find world class craft ales and lagers, in Fairbanks, the Golden Heart of Alaska. They spend more money on the best ingredients rather than quirky names and labels. You can swing by their taproom for a sample pint, take home a growler or even a keg at their brewhouse, or relax with friends at their biergarten. Foodies can indulge in nibbles from their rotating selection of food trucks or even bring their own grub.
Established in: 2012
Must drink: Maibock Lager, Scottish Export, HooDoo Stout, Kölsch, New England IPA.
Events: Caturday, where the brewery hosts an adoption drive for local shelters.

Founders: David McCarthy & Jason Motyka
With two locations – in Denali and Anchorage, 49th State Brewing is the brainchild of an Alaskan adventurer and a chef/restaurateur/brewer. With music, theater, comedy and award winning beer on one hand and a rooftop patio overlooking the Cook Inlet and Alaska Range on the other hand, visiting the Anchorage brewery is an immersive experience. The Denali outpost is like a beer-centric base camp for those experiencing the wondrous wilderness of Denali National Park. Don’t miss the outdoor concert series in the expansive beer garden!
Established in: 2010
Must drink: Solstice IPA, Tropic Tundra DIPA, Most Coast Stonefruit & Melon Pale Ale, Gustavus Gose.