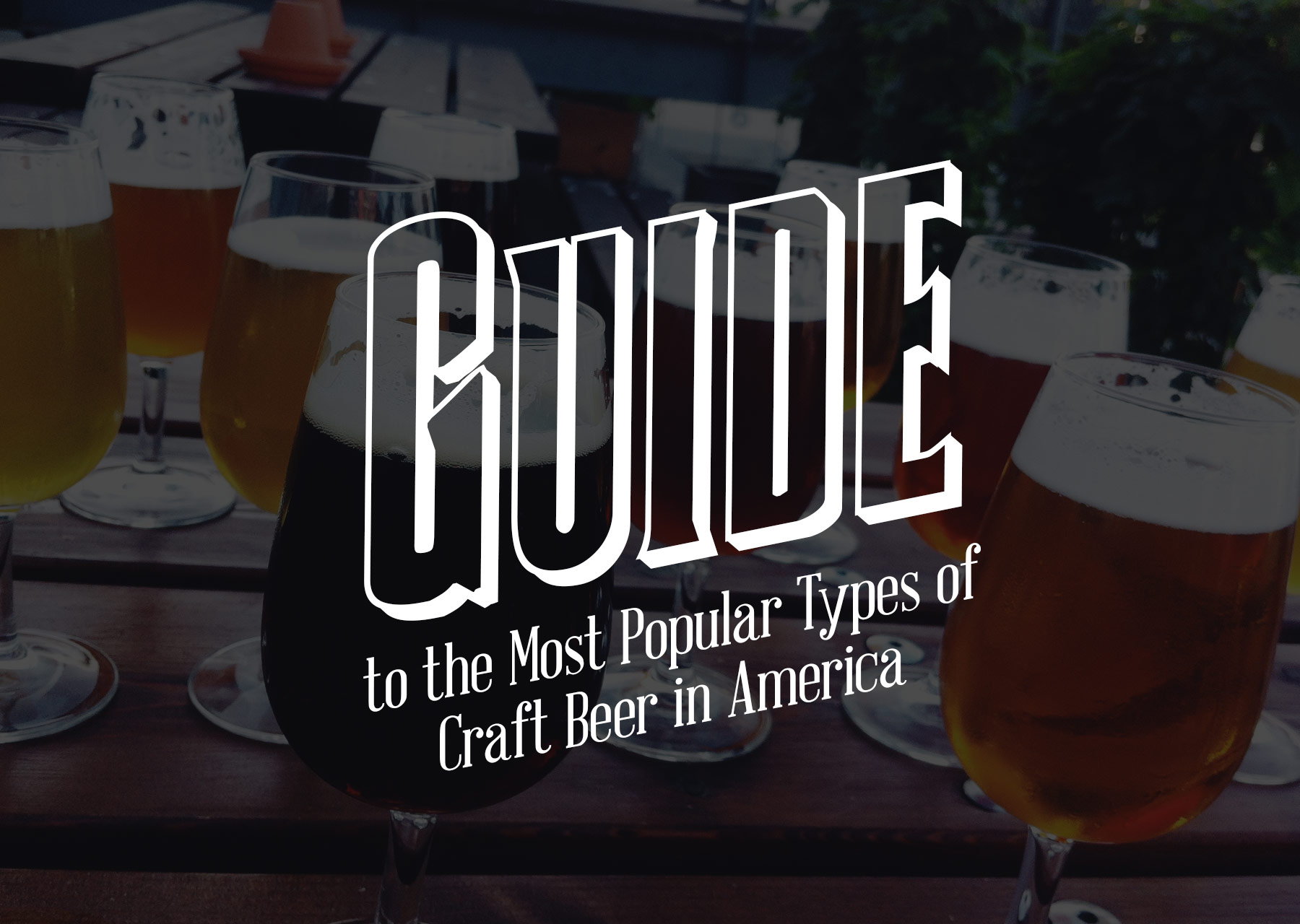 Guide to the Most Popular Types of Craft Beer in America

Now more than ever, beer drinkers enjoy variety in their beer options than any other point in history. The boom in the craft beer scene around the country brings so much diversity and complex flavor combinations to your local drinking hole. It may be intimidating to look at a drink list with a dizzying number of options. However, knowing what certain styles of beers are and how they taste, look and feel would help with this.

Check out this list of the most popular styles of craft beers in America and offerings from American breweries you can be on the lookout for.

Commercially available and consistently made, lagers are the first taste of beer new drinkers have. Classic lagers typically taste light and malty, without much variation on the flavor. It’s an inherently drinkable clean and crisp beer.

Check out: The Crisp from Six Point Brewery. Expect a fleeting caramel-like sweet maltiness and an aggressive aroma of yeast.

Indian Pale Ales (IPAs) are a staple of the craft beer scene as it’s typically a beer drinker’s first taste into the world of craft beer. It covers numerous styles of beer that get their flavor profile from hops and herbal or fruity flavors. Popular IPA styles are British IPA, a maltier and bitter variation, and New England Style IPA, a fruity but less bitter kind.

Grab a pint of: Tree House Brewing Company’s Julius. Bursting with American hops, this beer is a bright and juicy combination of mango, peach, passion fruit and citrus.

The American pale ale beer, inspired by its English counterpart, helped distinguish American craft beer from other nations with its big bold American hops. Often featuring bold flavors like citrus and pine and lower alcohol content than IPAs, pale ales were made for easy drinking.

Pilsners have a brisk and subtle flavor and snappy bitterness that even a seasoned brew master can find difficult to make. The style is simple but gives little room for errors in the brewing process. The charm of a pilsner is in the challenge of creating one that is memorable.

Stouts are sweet, full-bodied, roasty ale that hints coffee and cream. While the darker color of the beer may give the impression that it’s tough to drink, stouts can be sweet enough to offset bitterness. American stouts are strong, highly roasted with high malt flavor that mimics coffee or dark chocolate.

Hunt for: Kentucky Brunch Brand Stout by Toppling Goliath Brewing Company. This beloved brew shines because of its complex flavors and drinkability.

Similar to stouts, porters are dark in color due to common ingredients such as chocolate or other dark-roasted malts. Typically, they taste less like coffee than stouts and have a more chocolate-y flavor profile.
Go with: Morning Wood from the Funky Buddha Brewery. This popular imperial porter is brewed with coffee, maple syrup, and smoked salt. An interesting “breakfast inspired” porter, indeed.

America’s appreciation for Belgium’s rich and colorful beer culture has manifested in the wide variety of Belgian-style beers available. Breweries all over the country are coming up with Belgian-style creations like blonde ale, dubbel, golden strong ale, pale ale, quadruple, saison and tripel.

Look for: Double Barrel Dubbel by Brewery Ommegang. This big rich beer is a beautiful blend of traditional Belgian-style dubbel aged in bourbon and brandy casks.

For the malt ingredient of beer, the wheat beers rely on wheat. This gives it light color and a crisp and refreshing taste paired with a citrus slice. Typically, American wheat beers range from clear to cloudy in appearance and have a distinct hoppy character.