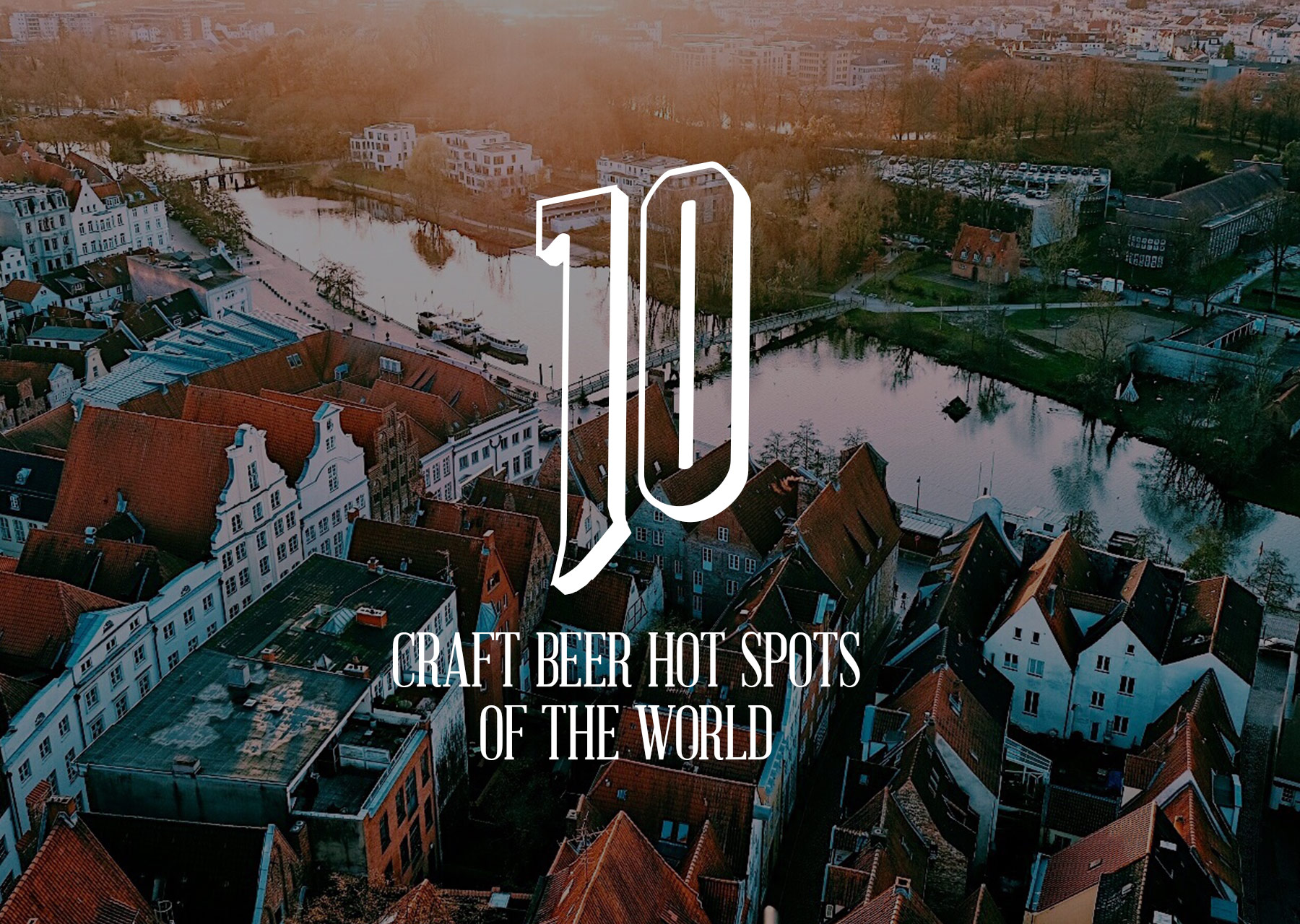 For a low-down on your two favourite topics – travel and craft beer, let’s go on a beer pilgrimage around the world

Order a beer anywhere in the world and you can bet a 100 pints that the beer you are drinking traces its origin to one of these ten countries. Think of these countries as the ‘Silicon Valley’ of beer! Where all sorts of cool ideas – beer styles, brewing techniques have evolved and have been adopted by folks all over the world.

Nestled between storied beer cultures – Holland to the North, France to the south, Germany to the east, and the United Kingdom across the channel to the west – it is not surprising that Belgian brewers have liberally drawn influences and applied it to their craft. No beer pilgrimage will be complete without the Trappist Beers and the Lambics from Belgium. These are the ‘iPhones’ of the world of beers! The Trappist beers are brewed under the control of Trappist monks and are amongst the rarest beers in the world. Classified as Enkel, Dubbel and Tripel, some of the most sought after beers in the world today are of Trappist origin.

Lambics are beers that are fermented by exposure to the wild yeasts and bacteria that are said to be native to the Senne valley and give these beers their distinctive dry, vinous and cidery flavors. So, when you are in Belgium, do as the Belgians do and pick up the strangest sounding name on the beer list. You will never walk away disappointed!

2. Germany – the Mecca of beer

The home to the iconic Hefeweizen and the spiritual home of the smoky Rauchbier, this nation’s love affair with this beautiful beverage goes back to over 3,000 years. Scarcely is any other product in Germany viewed as emotionally as German beer: It is the drink of the man and woman in the street, Germany’s national drink. The best place to begin this leg of our pilgrimage would be the storied brewing region of Bavaria. Nestled in the southeast of Germany and home to some of the oldest breweries and brewing styles in the world. While Germany has no shortage of festivals, at the top of the heap is the revered Oktoberfest. To attend one is to experience what Germans call Gemütlichkeit, a distinctly German easy-going good time that is centred on beer.

In the late 1970s, a ragtag bunch of homebrewers decided to convert their hobby into a business by starting microbreweries to give beer drinkers ‘real’ beer as opposed to a broad approximation of beer that was available at that time. What started as a renaissance of sorts is now today 1700 microbreweries and thousands of beer styles strong!

A unique style, the American Pale Ale was born, a homage to what beer used to be, and it was brewed with everything that was missing in industrial beers: malt, hops, taste, and love. It laid the foundation to what has become known as the Craft Beer Revolution, and in the course of it, changed the perception of beer forever.

4. Ireland – Skip the pubs and journey to the source

As a beer traveller, you can drink to your heart’s content in almost all European countries, but the crown jewel of Stout is definitely Ireland. And a visit of any brewery or bar will lead you to discover a new beer, one that you probably haven’t come across before. While Guinness definitely dominates the beer culture in Ireland, it doesn’t have a complete monopoly as most may assume. For those who don’t fancy the Guinness-like dark beers, there are other brews like Irish Red Ale, lagers and light ales.

A quick suggestion would be to skip the pubs and journey to the source. The numerous breweries scattered around Ireland will throw you into a world of beer tours and tastings that will give you deep insight into the country’s famous tipples.

5. India – Beer of the British Raj

It’s a lesser known fact that beer in India has had a very colourful history that dates back to the 17th century. In the 1790s, during the British Raj, the British had firmly established themselves in India. Only one thing was missing – beer! Due to the sweltering humidity, and lack of refrigeration, brewing in India was unheard of. Ambitious attempts to transport beer in ships, arrived in India, flat and sour. Finally, a solution was found thanks to George Hodgson of London, who experimented and added extra hops to protect the beer from spoilage. Not only did it have an increased A.B.V., Hodgson’s India Ale arrived in India with a resinous hop aroma. Soon, people were clamouring for the delicious “India beer.” And that’s what gave birth to the India Pale Ale or IPA.

Today, of course, in urban areas, the beer landscape has completely changed with access to a large variety of domestic and international brands. From Kingfisher to Hoegaarden, Haywards 5000 to Schneider-Weisse, beer lovers have a large variety to choose from. Craft beer and microbreweries are a new and exciting trend that is picking up across the Indian shores.

6. The Czech Republic – a Noble mention

The Czech Republic has a rich history with beer, as the region grows one of the most “noble” varieties of hops – Saaz. Named after the city Žatec (pronounced Saaz), this hop is exported all around the world. It is the main hop used in the production of global beer Stella Artois and is used extensively to flavor beer styles such as the Czech pilsner, in other countries.

The Czechs have been brewing beer since the year 993 and their most famous tipple is the pilsner, which has been adapted across the world as an important style of beer.

There’s much more to Japan than just saké and sushi. Besides the big industrial beer makers (Kirin, Asahi, Sapporo, Suntory, and Yebisu), the smaller craft beer industry of Japan did not exist 26 years ago. However, today, Japan has discovered beer like never before. And there are even walking tours across the country to properly experience it. Tiny izakayas serving crisp, cold, lagers will remind you of your local dive bars back home. Crowded post work hours, these hole-in-the-wall bars serve tender chicken yakitori skewers, tuna squares and salted pods of edamame. All washed down with a cold, frothy, freshly brewed beer. A heady start to the weekend!

Factory tours: The Asahi Ibaraki factory offers 90 minute factory tours, followed by beer tasting and snacks atop the 60m AIM Tower. Yokohama Brewery offers a brewery tour for 50 minutes and continues into the 20-minute tasting session afterwards.
Must drink local brews: Fujizakura Heights beers, which are brewed at the base of Mount Fuji using the mountain’s fresh water. Hitachinos’ range of beers and saké.
Must visit beer bars: Popeye – the oldest craft beer bar in Tokyo, Brewdog Roppongi – the Tokyo outpost of the UK megalith brewery, Craft Beer Market – a small chain of bars in Tokyo.
Pro Tip: You can even get a hold of a Hello Kitty Ale (brewed in Hongkong but loved in Japan)

You would be surprised to hear that Singapore has been credited with kickstarting the craft beer movement in India! That’s not all, Singapore has been quietly working its way into becoming a beer enthusiast heaven, with seemingly endless rows of shelves filled with craft beers from all parts of the world.

Beer is sold in all formats and in the oddest places to pique any curious beer traveller’s interest. From kopitiams (street coffee shops aka beloved shops where locals go for post work drinks), to street taps in Chinatown to hybrid liquor convenience stores and even picturesque botanical gardens! The botanical gardens come complete with wooden verandas, water features and traditional Balinese huts. And of course, in the industrial, steel breweries where all beer stories begin. In Singapore, there’s something for everyone.

Must try brews: Pink Mamba by Blue Bali Brewhaus, Monster Green Lager Beer by RedDot is green as it is brewed with Spirulina, a green cyanobacterium full of vitamins and antioxidants.
Strange but fantastic places to drink beer: Booze Pharma-C: a recently opened hybrid of a liquor convenience store retailing more than a hundred different craft beers and ciders.
Blue Bali: Situated in Botanical Gardens this watering hole is surrounded by lush greenery
Brewerkz: At Riverside Point, this one’s known for it’s distinct industrial-style custom-made microbrewery.

It’s a myth that you can’t drink in the U.A.E. And this is proof! While the desert has gained a reputation to be anti-alcohol, it’s not completely true. Though you can’t drink at the uber luxurious Burj Khalifa, there are perfectly legal bars and restaurants to quench your thirst, if you are looking for a cold beer in the sweltering desert. From heady cocktails, to wine festivals and imported bottled beers, Dubai does cater to the cravings of it’s large expat population.
The popular beers are usually the famous exports from the US mainly and include Fat Tire, Samuel Adams, Corona, Heineken, Coors light and Dos Equis. However, in a few popular pubs you can be transported to Ireland at the Irish Village where you can sip a bitter Guinness Stout, Hofbrauhaus Dubai for an authentic German bier garden experience, complete with cloudy weiss beers and even pork sausages and sauerkraut. There are even a bunch of Belgian Beer Cafes peppered across the city serving craft beers on tap and Stella Artois in bottles.

FAQS for drinking in Dubai
1. One can drink at licensed restaurants, bars, and hotels
2. It is illegal to drink in any public place
3. There are particular licensed stores from where one can purchase alcohol on with a license
4. One can only get a license if-
– Aged 21 or more
– Should not be a Muslim
– Should have a residence visa
– Possesses a monthly salary of minimum AED 3000
– Drunk driving is not tolerated in any case and an instant penalty is given.
– Prohibited to drink at the workplace.
– Duty-free limits must include Four litres of alcohol or two cartons of beer only. It should not exceed. Passengers should be 18 years and above.

England’s tumultuous affair with beer started way back in the 14th century. Did you know that the English drank beer instead of water because it was said to be much cleaner and safer to drink. Smart thinking! The world of beer in England needs a chapter in itself as the English have single handedly created dark brown, robust, malty ales like Bitters, IPAs, Porters and Brown Ales. While these beer styles are unique to England, they spread far and wide, as the British began colonization in the 16th century. The “the heart of England,” the quintessential “English pubs” in villages, country sides and city centres are the focal point of local communities even today. If you enjoy a tour of history, a pint at one of the oldest breweries will take you back to the 16th century. Cheerio, then!

Thus ends our tour of the top 10 craft beer hotspots of the world. From the holy trinity of beer of Belgium, Germany & the United States of America to the far flung craft beer hubs of the East like Japan, India and Singapore, the craft beer world is frothier today. It is indeed a great time to be a craft beer drinker. Ein Prosit, Sláinte and Cheers!