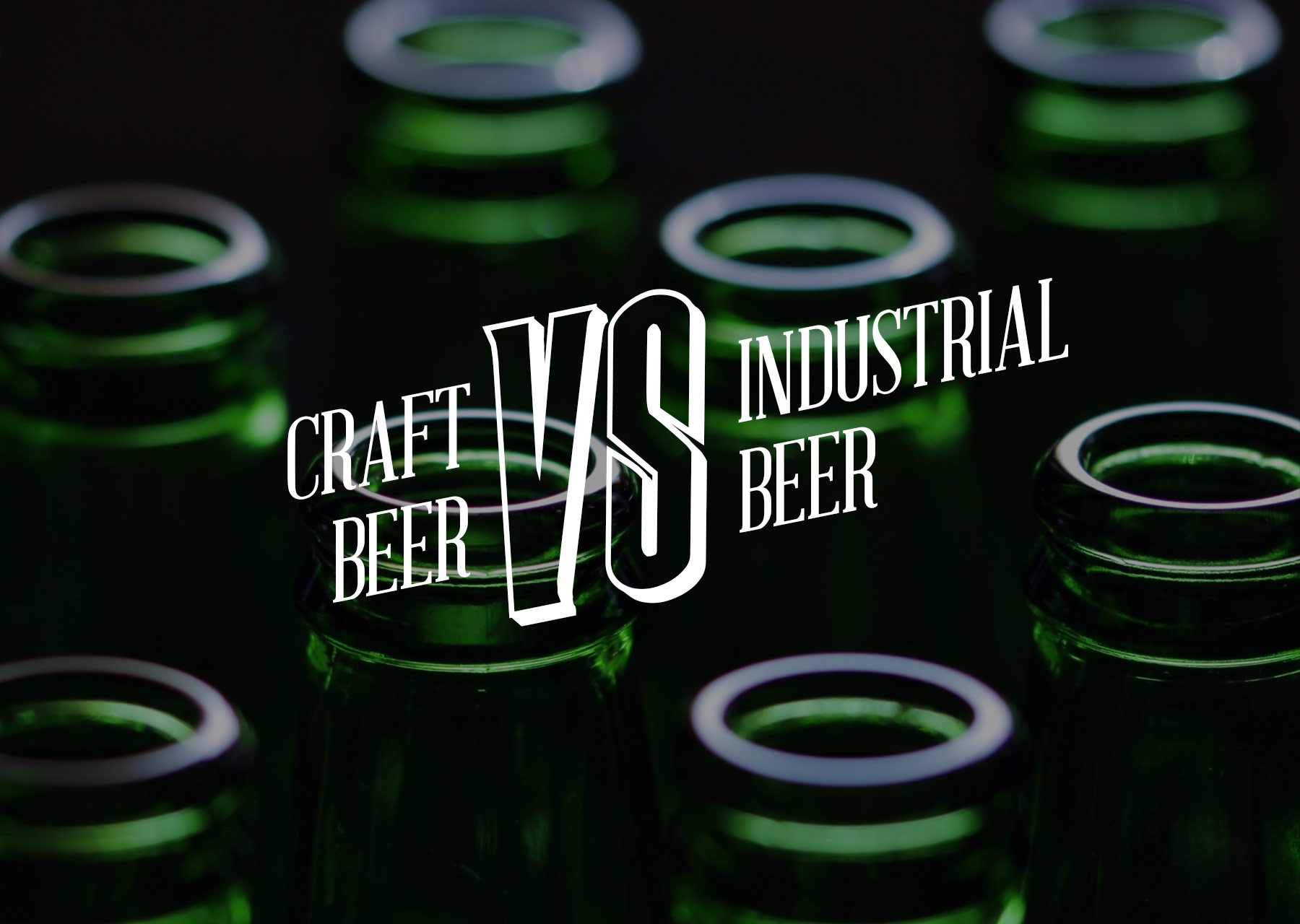 What is craft beer? And how is it different from the beer I have been stealing from my dad’s stash? Well, other than the fact that it does more than just get you mildly buzzed, it’s an eye opener for your palate. With flavor, aroma, color and mouthfeel, craft beer will tantalise your tastebuds and flex your beer belly. Here’s a beer connoisseur’s guide to Craft beer versus Industrial beer.

All beers are made from four basic ingredients – Malt, Hops, Yeast and Water

Craft Beer
Craft beer uses “only the best ingredients” both local and imported. Special care is taken when choosing speciality malts, smoked grains, deeply-roasted rye, hops from hop-growing regions of the world, purified water and specific yeast strains. After all, it’s a combination of these ingredients that create unique fermentation profiles and flavor characteristics.

Industrial Beer
In a nutshell, Industrial beer uses malt and grains, but supplements the main mash with adjuncts (unmalted grains) to achieve larger quantities. They also throw in sugar, starch or glycerine to hike up the alcohol content, throw in as many preservatives as possible, so that it lasts longer on shelves.

Brewing beer is an art and a science, and a product of human skill

Industrial Beer
Most industrial beers are brewed by behemoth machines, who do most of the work. Not only are brewmasters replaced by machines, recipes are replaced by Standard Operating Procedures, much like any mass produced product.

Fresh is a flavor, preservatives are not

Craft Beer
Craft beer needs to be drunk fresh, on tap, and preferably straight from the tanks (if you’re lucky). Craft beer only uses natural preservatives i.e. hops and alcohol to preserve freshness. The shelf life of a craft beer is usually shorter, around 10 days for unopened growlers to 30 days for unopened kegs.

Industrial Beer
Industrial beer makers are known to throw in preservatives in their tanks, so that a bottle can last for 6 to 9 months on retail shelves, bar counters or in your fridge. Sulphite preservatives are often added to beer to reduce bacterial spoilage and help reduce undesirable aromas, flavors or colors that are produced during the fermentation process.

The right temperature for maximum enjoyment

Craft Beer
Porters, stouts, wheat beers and ales have unique aging properties and require different temperatures to be consumed at their very best. Craft beer makers suggest serving between 4°C degrees to 8°C degrees, so that you can actually taste the beer.

Industrial Beer
Industrial lagers are served super chilled at 1°C. Refreshing at first, this is also done to numb your taste buds so you can’t really feel or taste anything and it’s harder to register the subtle flavors of the beer. Now that’s a smart way to make sure that while no one loves you, no one hates you either.

Industrial Beers
Industrial beers use tanks that hold 5000 hL (a hectoliter is 1 liter X 100) to ensure two things – economies of scale and cheaper beer. Made in batches as big as olympics size swimming pools, there is no scope of any experimentation. To play it safe, most breweries stick to lagers and make them as boring as possible.

6. Craft beer is gender neutral: It likes women too!

Industrial beer
It is the lack of imagination that Industrial brewers suffer from which results in them just throwing in hops, hops and more hops in the hope that bitter beers will make men grow more hair on their chest. But bitterness is not that crucial to a beer. Balance and flavor is.

7. Food pairing – A feast for your tastebuds

Craft Beer
Craft beer food pairing has gone where no one has gone before. Not even wine! In cooking too, stouts, ales, ciders and porters, are being increasingly used as marinades, glazes or basting sauces to impart unique flavors to dishes. From sandwiches to salads, to smoky ribs and desserts, craft beer is emerging as a versatile ingredient used by chefs.

Industrial beer
As an ingredient, industrial beers are used in beer-battered dishes and as dressings in salads. However, when it comes to food pairing, bar snacks like pizza, chicken wings and fries are a match made in heaven. But honestly, these cheesy, deep fried, carb-loaded snacks would pair well with even water, right?

Craft Beer
When it first started, craft beer was generally drunk in small, intimate spaces, with microbreweries usually at the heart of it. Today, you can drink a good pint of craft beer in taprooms, brewpubs and gastro-pubs. However, the best place to sample many craft beers at one time would be at beer festivals, home brewing meet-ups and beer tapping sessions.

Industrial Beer
Industrial beers are available everywhere and are easy to access all year round. From concerts to large sporting events, airports, and huge retail stores, industrial brewers have worked hard to muscle out any competition from occupying prime shelf space.

This brings us to the end of the comparison between craft beer and industrial beer. Now that you know that difference between the two, the next time you are in the mood for a beer, choose a local brew. And before you take a sip, raise your beer mugs to brewers everywhere, and thank them for what they have done to this beautiful beverage.