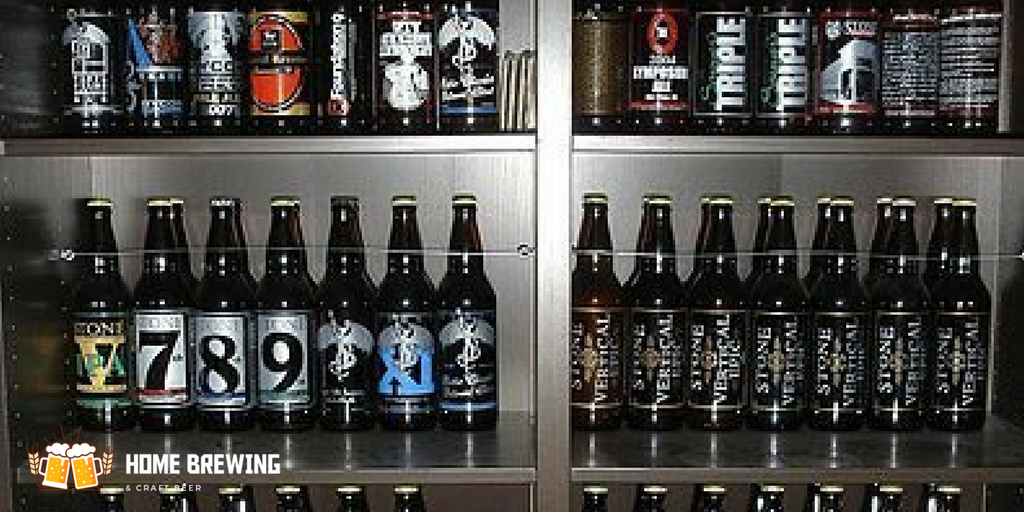 Beer has changed over there years from buying the beer and drinking it on the spot to having massively flavored beers that need time to age for all the flavors to come into fruition.

Avery Brewing Company out Boulder, Co. is a prime example of a brewery that makes very powerful beer that can be aged for 1 to 25 years.

Must you age big massive beers?

Of course not! However, by aging beer you’ll actually be drinking the beverage the brewers intended upon.

Beer does not have the shelf life of wine and that should be noted. While certain wine can be aged for 20 to 40 years, beer typically becomes oxidized (oxygen has now affected the flavor of the beer negatively) quite quickly.

The average shelf life of a basic beer (5 – 6% alcohol by volume -abv-) has no more than 6 to 8 months. The higher the abv the longer you can age a beer. Some beers can be aged up to 25 years and still taste amazing! These same beers after 2 to 5 years start to take on the flavors intended by the brewers; these beers are meant to be aged!

Some brewers have no idea what will come of their beer down the road while others have a very good idea; this is half the fun of aging beer.

Beer should be stored upright, not on the bottles side such as wine. There are a number of reasons behind it I’ll touch on just a few. One is yeast. Yeast settles at the bottom of bottles and by laying a bottle on it’s side, two things happen:

A yeast ring (or water mark) will happen against the side of the bottle making it very difficult to control the yeast as you pour the beer.

Beer bottles have their own humidity (inside) that will allow the cork not to dry out (even after 10+
years!) so there is no need for the beer to touch the cork to prevent drying out. Remember corks are no sponges and are almost impermeable to water so having the beer touch the cork does nothing for the beer. Always store your beer upright!

The most convenient place to store your beer would be a refrigerator. A fridge has the ample space to hold enough beer as well as forcing you to keep the beer upright. As much as I would love to say go out and get a self contained – temperature controlled unit for aging your beer, they almost always force the bottles on their sides; they are meant for wine, not beer.

With long term aging of beers (years) a fridge is not ideal. A fridge is meant to keep food dry and drying out the cork will become an issue. For beers you wish to age for longer than a year a cellar is much more appropriate.

A caller will be a room with temperature control and humidified and away from sunlight and environmental changes. This is the most ideal space to age beer long term.

Another thing to note about aging beer is light. Natural sunlight (UV) will destroy your beer. It will lead to what the industry refers to as “sunky or sunk’d beer”. While there is no danger in drinking a sunk’d beer why in the world would you want to? While cans can impart different flavors to beer (it’s aluminum mind you), glass imparts no flavors and is ideal for most beer. While cans allow for zero light to get through (never having skunk’d beer) bottles on the other hand have to worry about light. Having bottles in the fridge unexposed to light will ensure a beer that can fully age.

If you are very worried about light wrap the bottle in a brown paper back. Brewdogs from Scotland wrap their high-end beer (32% and 41% abv running $85 – $100 a bottle) in brown paper bags from brewery to where the beer has been allocated to ensure zero exposure to light.

Make sure when buying beer you buy two bottles of each type. One for drinking and one to come back to in a year or more to see the aged difference of the bottle. If you’re buying a limited release which can be very highly allocated and beyond difficult to track down, buy more than just two bottles; get 6! That will give you one to drink now and 5 more to age that you can open every year to enjoy and see the difference in beer.

Lastly, know that the hardest thing to control when aging beer is yourself. You will almost always have a little voice creep in your head saying “drink me”. Don’t listen to him. It’s so difficult to have this amazing bottle of beer sitting in your fridge with only one purpose, to be drunk. To age a beer is to feel as if you’re doing something wrong!

You’re going against every grain of willpower not to drink this beer. It’s very similar to knowing where your loved ones hid your Christmas presents and not peaking. Master the ability not to touch a beer you’re aging and you’ll have come quite farther than most anyone else in the world of beer.

10 Breweries in North Carolina Totally Worth The Visit

The Right Home Brewing Kit for You