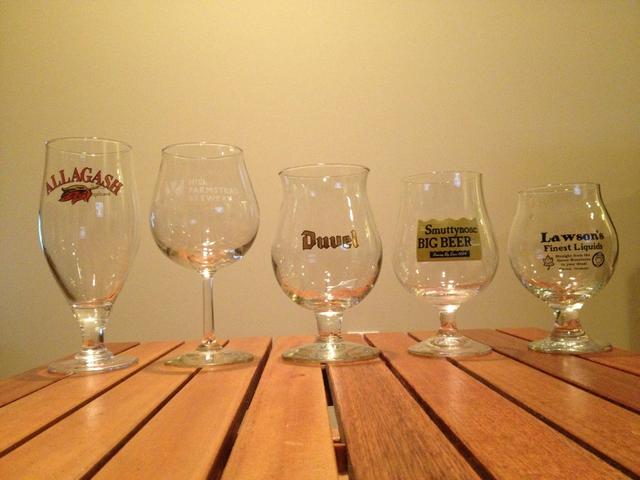 How do beer glasses affect the whole beer-drinking experience?

Some beginner beer enthusiasts say that glassware is just a marketing ploy, but the adept beer drinker knows better. Whether from a bottle or straight out of the beer taps, glassware is an important aspect of the beer drinking experience. For example, beer steins differ from a flute glass in forming a head as the beer is poured in, which makes a big difference in appearance and taste. A darker beer should have a wider brim in order to allow for more release of the volatiles found in the brew, thus enhancing the strong flavor and smell. A bottled beer is pasteurized and needs a taller, thinner pilsner glass for color and pourability.

There are a lot of little different things like that that can make a big difference in your drinking experience.  Now, of course, there’s a big marketing presence in all these different varieties of beer glasses, but a true beer drinker knows that as the beer is poured in, something else is going on besides the nice looking logo on the side of the glass.

The hue of the beer changes, the head forms at the top, and the anticipation of that first cool drink is more profound and complete. Just like any other pleasurable aspect of life, there’s a psychology involved here. Flavor, texture, aroma; these are the things that make up the drinking experience. If you’re drinking to relax and enjoy yourself, why not do all the things you can to enhance the experience.

One of the most important aspects of beer glasses is how the shape affects the formation of the head. This is important because the head acts as a sort of trap for the volatiles in the beer. What’s volatile in a beer? Compounds such as hop oils, a variety of yeast byproducts such as spices or alcohol are what make up a beer’s aroma and taste. Earlier beer that man drank was darker, stouter, and a lot grainier too, mainly because of the lack of filtration. As glass became more and more popular, so did lighter colored beers and better filtration processes.

With so many different kinds of beers, a variety of beer glasses are needed to produce the maximum desired effect of the beer drinking experience. Many people have said that the 16-ounce pint glass is overall the most versatile glass for the widest range of beers. Many people place the importance of a glass because of the shape as they drink.

A tall pilsner glass can be tipped up for quick drinking, while the tall narrow glass keeps the entire drink cold the whole time. So which is the correct glass to use with which beer? The answers are vast and varied. Europeans may do it completely different than anyone else in the world, but what it really comes down to is your own personal preference. Go with some recommendations and then branch out and try some on your own. You may be surprised at the experience and find your own preferences to be totally unique to yourself.

Well, it’s because it has a lot of benefits and advantages.

First, which is the most practical benefits you could earn, is it is cheaper than buying commercial beers. The commercial beers are taxed, and a lot of production costs are passed to consumers making it more expensive than home brew beers. With regard to this, we could actually cost cut our expenses and save more during celebrations, festive and the like, where beers are commonly serve. Take note, home brew beers are not taxed as long as they are not for commercial distribution.

Second, home brewing is one way of gaining self knowledge about this particular endeavor. It may even become your hobby that eventually hone and develop your skills that will certainly be a potential asset to gauge oneself from others.

Third, home brewing is eco-friendly. Commercial beers are manufactured in the factory. This means that a large production of beers requires a machine. Much of the machines utilized are run by fuel energy. As you will note, burning of fuels are number one causes of green gases. In addition, travel logistics or the distribution of commercial beers from factory to market also requires transportation. And again, these are fuel powered engines.

Fourth, home brewing is more personalized or customized.This means you could make beers according to your own preference and taste. You could adjust the bitterness, sweetness or possibly even the alcohol content of the beer. Also, experimentation could lead to unique output that possibly greater than the commercial beers.

Fifth, sharing brewed beer during celebration could win the fascination of others. When others get to taste your beer, judge it as first class, one of a kind and good quality, you earn nothing than the reputation of others. And I think this is the greatest benefits of all, being the effect is on personal level, because it is an achievement to be recognized by a community to be a good beer brewer.

As a consequence, whether you like it or not, beer enthusiasts would keep on looking after you to brew for them. This opens the door for opportunities to make money. At first they will hire you to mix and brew beer for them. In the end while your service is in demand, you will end up putting your own little brewing shop. That means maximizing all your skills in brewing beers to service growing number of beer lovers.

Is not this amazing?

Your original plan of cutting expenses or your curiosity may end this far. Well, you may argue that others will just be contented with personal recognition and may not venture on commercializing their home made product. But this doesn’t mean that it is not possible, in fact it is very much possible especially when the opportunity is very promising. However, it requires skills and perfection to reach this far. In addition to that, interest and passion is actually the main ingredient to move you do things. Unless this is present, nothing would be accomplished.

Now, why home brew beers? Why not.

Will there be beer if you don’t have water? Of course it’s impossible; brewing water is the most basic ingredient in home brewing. The characteristics of the water used for brewing will spell the difference between a good brew and a forgettable one. For this reason, it is always recommended that you do some fact-checking to know the status of the water in your area.

This is necessary so that the moment you know that the local water is of poor quality, and then you can always do something to improve on its quality during the actual brewing session. Water for use in home brewing is important in a sense that brewing cannot function without this main ingredient.

Did you know that around 4 to 6 liters of water is needed in order to produce just one liter of beer?

This is how water-intensive the beer production is. This is not only the use of water in many breweries. Do expect water to be used in other production processes, for example water is also used in the mashing, the filtration and even the packaging of bottles of beer. And all of these processes will require different kinds of water, at least in terms of quality.

Now how does water affects the production and the brewing of beer?

Let it be known that water can affect the production of beer in three ways:

• The ions in the water are important in the mashing process. And the character of the water used for this process will have an impact on the quality and the taste of the beer.

• The water that you choose will also have an impact on the amount of ‘bitterness’ of the end product. And finally,

• Did you know that water is the biggest contributor to the taste and flavor of the alcoholic drink? This is true because water is the most important ingredient in the beer.

What you can do is to dilute the tap water available by using distilled water if you think that the concentration of some ions is high. Or you can also make use of some additives if you found out that the count or the concentration of some ions in the local water is too low. Again, you need to learn how to assess and to adjust the local water since the beer quality in the end will depend on the main ingredient.