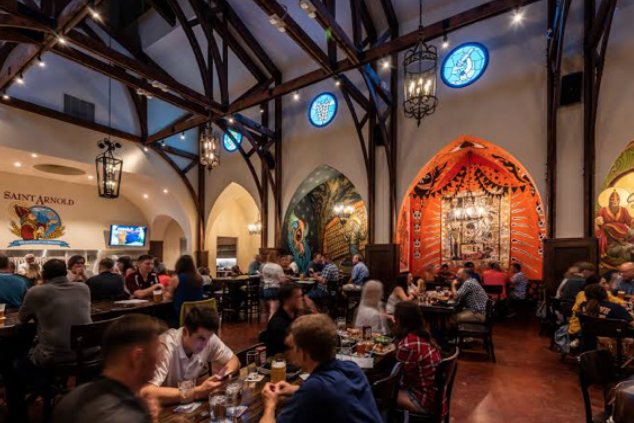 10 Breweries in Texas You Can’t Miss

Texans have a buzzing craft beer scene. What started with about 20 breweries in 2005, the Lone Star State now has over 300 active independent breweries to explore.

Each brewery with its own unique offering, bringing together creativity, craftsmanship, and locally sourced ingredients. For the Texans who love to drink, these breweries aren’t just a place to grab a pint but also a place to gather and meet friends.

Check out the list of breweries to visit in Texas!

Run by a family in the beer-making business since 1847, it’s no surprise that Rahr & Sons is one of the top craft breweries in the state. It opened its doors to the community in 2004 to offer quality brews and be a lifestyle hotspot for the Fort Worth area. The brewery has an open space where people chat over cold beers or enjoy the live events it is host to. It has also partnered with local restaurants and food trucks to serve up delicious grub.

Saint Arnold Brewing Company is the oldest craft brewery in Texas. Named after one of the patron saints of brewing, the brewery holds a deep passion for craft beers. In fact, it’s the small crew that does everything at the brewery: brew, filter, keg, bottle, sell, and drink the beer. The brewery also has a spacious beer garden and restaurant to drink your beer at.

Saint Arnold has a variety of beers on tap all-year-round and on rotation; sample the Lawnmower, a crisp and refreshing German-style Kolsch.

Jester King Brewery is an authentic farmhouse brewery, where you can enjoy a brew in a relaxed and beautiful setting in the Texas Hill Country. On this site is also a kitchen that endeavors to serve food uniquely tied to a time, place, and people. This unique brewery offers tours of the location.

Offering not just beer but also spirits, Ranger Creek is a Texan treasure. This “brewstillery” was established in 2010 and is well known for its quality craft beers and whiskey offerings. The on-site tasting room is a great way to experience the beer, whiskey, and handcrafted cocktails it offers, with a variety of snacks available. Ranger Creek also hosts events in partnership with the San Antonio community.

Taste one of the brewery’s famed brews: Sunday Morning Coming Down. This deep brown ale is mixed with cold-brewed coffee from another San Antonio favorite: Merit Roasting.

B-52 Brewing Company serves up cold craft beers in a unique setting: smack dab in the middle of a forest. The taproom is located in a hangar-like structure made from a reclaimed storage container. The beer garden offers ample space to enjoy nature and the outdoors. Holding true to its motto, the brewery is “too good to ignore”.

For a fruity brew, try the Smoothie Tarts, kettle sour Berliner Weisse with unique flavor profiles such as peach, orange, vanilla, and coconut.

Brewing since 1996, Real Ale Brewing Company is a homegrown player in the Texan craft beer scene. Its brewery is located in the natural beauty of Texas Hill Country. Their brews also maintain this natural ethos – beer is brewed with as little processing as possible. The brewery offers free tours on Friday and Saturday afternoons.

Claiming to be ”hell-bent on excellence”, Austin Beerworks is one of the premier craft breweries in the state. The beers are crafted with clarity of flavor and clear intention; the brewmasters pride themselves in never releasing a beer they aren’t excited about or proud of. To enjoy a beer out of the kegs, the brewery has a taproom with an on-site food truck.

Try the tap-room exclusive Tesso, a light and refreshing Belgian style table beer that goes well with any meal.

The Lone Pint Brewery is dedicated to creating ales that are distinctly Texas brews. The eco-conscious brewery also prides itself with the renewable energy that powers its brewery.

Order a pint of the brewery’s core offerings like Yellow Rose, strong single malt and single hop IPA named after a Texas Heroine.

Located in an unassuming strip mall, Turning Point Brewery is one of the best places in Bedford for craft beer. The brews are interesting and flavorful and often the tables in the brewery are abuzz with people having engaged conversations about the beers. The list of beers is ever-changing as the brewery is staying away from the traditional idea of having a core line of beers.

Order a flight of beers from Turning Point and you won’t be disappointed with the selection. One of the winners is Face Down in the Muck, an Imperial stout brewed with Vietnamese coffee.

You can never go wrong with the classic pair of pizza and beer and Pinthouse Pizza Craft Brewpub aims to perfect this pairing. This popular and cozy brewpub now has 3 locations, the latest in Round Rock. The brewpub’s acclaim owes to its juicy and hazy IPAs, arguably the best in town.

Grab a pint of the popular flagship Electric Jellyfish, a bright tropical citrus IPA, to go with your pizza.